2016 Ford Explorer ‘Quite the Find’ at Los Angeles Auto Show 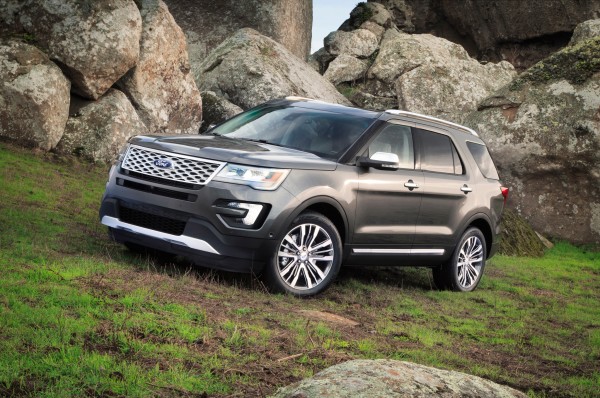 The 2016 Ford Explorer was unveiled last week at the Los Angeles Auto Show with lot’s of new content in the larger crossover. A new engine, new styling, and new interior features have us betting that this new Explorer will be a popular one

Ford is debuting this new 2016 Explorer with a new 2.3-liter EcoBoost four-cylinder engine to replace the previous 2-liter version. This new four-cylinder is the same engine used in the 2015 Ford Mustang, but with likely different tuning. Also, as of 2016, the Ford Explorer will be offered with a four-cylinder and all-wheel-drive. This was something requested by customers, and apparently Ford listened.

But Ford didn’t stop there when it came to giving customers what they are asking for in this SUV. According to Matt Zuehlk, Ford Explorer brand manager, “There’s a market for more upscale SUVs, as 90 percent of today’s Explorer Sport buyers purchase the most expensive package available. That’s a strong signal customers are ready for Platinum.”

Jim Farley, Ford executive vice president of global marketing, said high demand for the Explorer Sport showed Ford that there was enough support for a model with even more content

This equates to a new, fully loaded Platinum trim level that will be priced above the current top-of-the-line Explorer Sport, and needless to say, over at Quirk Ford, we are excited.  For the Base, XLT, and Limited models, the standard engine will be a 3.5-liter, naturally aspirated V-6 engine. Complemented by a six-speed automatic transmission, it will generate an estimated 290 horsepower and an estimated 255 pounds-feet of torque. The top-end Sport and Platinum trims come standard with Ford’s 3.5-liter turbo EcoBoost V-6 engine with an estimated 365 horsepower and 350 pounds-feet of torque, mated to a six-speed SelectShift automatic transmission. Platinum models add 20-inch rims, as well as chrome exterior finishes, a digital instrument cluster, premium leather, and a 500-watt Sony sound system.

Technology was another place with room to grow according to Ford Explorer drivers. Now in the 2016 Explorer, knobs and buttons replace the capacitive touch screen controls. Front and rear cameras with wide angle lenses and washers, parking assist, which can park the Explorer perpendicularly, LED lighting, adaptive cruise control, and heated and cooled front seats, just to name a few.

The 2016 Ford Explorer should arrive in the Quirk Ford dealership next summer. Quirk Ford is excited to showcase this face-lifted Explorer. How about you? Do you think Ford made the right decisions for this new Explorer? Let us know, and be sure to check out our Facebook page for the most up to date information.